Recent breakthroughs indicate an intriguing future for machine translation. But is it ready for prime time on global websites?

As the need grows—and accelerates—for companies to serve an increasingly diverse and global customer base online, so too does the need to serve them in their preferred languages.

MotionPoint has long advocated using human translators to craft this resonant online content. (And we still do; more on this near the end of this post.) But recent technological breakthroughs in machine translation have generated headlines in mainstream media. These innovations have also sparked conversations within growing companies. Is machine translation viable to use in our global online expansion plans?, they wonder.

Perhaps you’ve seen some of these headlines. Within the past six months, a special technology called Neural Machine Translation (NMT) has generated gobs of buzz within the translation industry and beyond.

Is machine translation viable to use in our global online expansion plans?

NMT is different from conventional phrase-based statistical machine translation, which has historically been used in services such as Google Translate. As a December New York Times story put it, NMT uses “artificial ‘neural networks’ that acquaint themselves with the world via trial and error, as toddlers do,” in an effort to “develop something like human flexibility.” The more limber and adaptable this virtual brain can be, experts say, the better its translations will be.

The recent flurry of coverage about NMT hails from a 20-page paper Google published last September. In it, the company revealed breakthroughs that wildly improved the accuracy and readability of NMT translations. The resulting translations left some folks, including one high-profile Japanese professor—an expert on human-computer interactions—“astonished,” the recent New York Times story said.

“Everybody wondered,” the story’s author wrote, “How had Google Translate become so uncannily artful?”

So why were folks agog for this Google announcement? For starters, NMT hasn’t been an especially efficient way to translate content, which is why it’s rarely deployed in production environments. Beyond being computationally expensive, it also often falters when it encounters unusual or rare words. And it’s infamous for translating content only some of the time, resulting in weird, incomplete mixed-language translations.

NMT is infamous for translating content only some of the time, resulting in weird, incomplete mixed-language translations.

Since then, Google has integrated its NMT approach into its Google Translate product, into a total of eight language pairs. The languages—which include major European, Latin American and Asian languages—represent the native languages of about one-third of the world’s population, Google says.

Such moves have long been afoot in the machine translation space. Last January, Microsoft announced artificial intelligence-powered changes to its own machine translation API. By leveraging its AI expertise, the company claimed it could now provide quick and easily-customizable translation systems without a customer needing to provide it “large amounts” of previously-translated content.

Amazon is also getting in on the action by beefing up its Pittsburgh-based machine translation development team. Interestingly, Amazon isn’t doubling down on NMT like Google. While there’s been “exciting progress” in that field in recent years, it remains in the “early stages of maturity,” Alon Lavie, a Machine Translation Group Manager for Amazon Pittsburgh, told Slator in January.

Lavie is far from the only professional who’s managing their expectations for NMT. The technology is “still a long way from ‘nearly indistinguishable from human translation,’” consultant Kirti Vashee said of Google’s September 2015 announcement.

Despite the recent extensive NMT coverage, the profession of human translation isn’t going anywhere. If anything, it’s thriving and growing. Based on a 2015 study that compiled data from more than 90 government resources, translation and interpretation services are the fastest-growing industry in the U.S. by job growth. The industry will add 36% more jobs—about 12,400—between 2014 and 2019, the study found. Data from a December 2015 U.S. Department of Labor report complemented those findings.

It’s clear human translation isn’t going anywhere, and indeed it shouldn’t. NMT and all other forms of machine translation still can’t hold a candle to the skills and quality that humans bring to translation. MotionPoint has long advocated for using human translators. In fact, we employ their skills extensively in our website translation work with customers.

When it comes to determining the nuanced creative intent of content, and conveying that intent in another language—using words that deliver far more than information, but also emotion and impact—the human brain reigns supreme. Preserving this intent and resonance is especially important for companies that are concerned with brand voice.

NMT still can’t hold a candle to the skills and quality that humans bring to translation.

We spoke to a few MotionPoint employees about the topic, including Eric Frank, Global Account Director for MotionPoint’s sales team.

“Human translation really is the only way to capture the true voice of a brand,” Eric explains. “There are countless nuances to copywriting—from levels of formality to wordplay to dialect—that translation software still can’t deduce or replicate. It often goes for the ‘lowest common denominator’ word choice.”

Out of the box, machine translation rarely takes into account word choices for industries or audiences. Take the automobile industry, Eric says. Some car manufacturers may use the word “cars” to describe their products, while others call them “automobiles” or “4-wheel passenger vehicles.” Those are deliberate creative choices made by the brand.

“But machine translation doesn’t understand that,” Eric says. “It’ll often use one word by default, which often doesn’t match the brand’s creative intent.”

These persistent missteps often make machine translation not worth the hassle for major site-wide use. Further, machine translation alienates customers, says Blas Giffuni, director of MotionPoint’s Global Growth team. The stakes can be much higher than simply presenting translated content that lacks verve, or is challenging to understand, he says.

Grievously mistranslated content becomes a serious liability and credibility problem for a brand.

“We’ve witnessed software-generated missteps when clients used machine translation,” Blas says. For instance, an outdoor retailer’s descriptions for “shotguns for hunting turkeys” was mistranslated by software into Spanish as “shotguns for shooting Turkish people.” Such grievously mistranslated content becomes a serious liability and credibility problem for a brand.

“Google cares about user experience,” Blas explains. “Machine translation rarely delivers well-written content, which is the very thing Google is looking for. It can penalize these sites, often by lowering SERP—or in especially bad cases, removing the site from Google’s index altogether.”

We’ll soon publish the conclusion to this two-part blog series. In that post, you’ll discover how human-powered translations—complemented by powerful translation-management technologies—can increase the impact of websites in international markets, wildly improve global SEO, and reduce costs compared to other solutions.

A proxy solution leverages code to replicate the look and feel of the primary website, swapping translated content on the fly to

Discover two best-in-class translation approaches to handle all of your omnichannel localization needs.

MotionPoint partners up with WPML to allow a seamless translation integration for WordPress users. 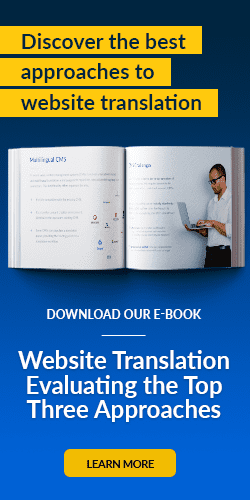